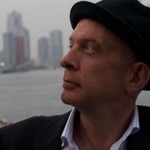 Please read the poem Invitation Standing by Paul Blackburn silently to your self.

BRING a leaf to me

just a leaf just a

take a leaf and

Can you hear the rhythm of the words and the sound the words make? Notice the way BRING is capitalized. Notice the way each line breaks. Notice the comma between spring leaf and an. Notice the lack of commas otherwise. Notice the way the word come is set off by itself, a tab away from the left-hand margin. I ask you to notice these things because this is how Paul Blackburn shows us how the poem is meant to be spoken and heard. Say BRING in a louder voice than you do a leaf to me.

Speed through just a leaf just a before pausing a moment to say spring leaf, an / April leaf and then pause and put some emphasis on come.

Read the poem again only this time, read it out loud. If possible read it out loud to someone. Ask them to listen to the sound and the rhythm. Don’t ask them what the poem is about. Just have them listen. Can you hear the poem’s sound, rhythm, and cadence? Can they? My students can and then can read it to each other just the way it’s meant to be read – and so can your students.

Take any poem you find that’s full of sound and rhythm and read it to your students.
Take the poem This Is Just To Say by William Carlos Williams for example:

This Is Just to Say

Tell your students you’re going to read them a poem. Tell them it’s a dictation and that you’d like them to write the poem out the way you speak it. Tell them that you want them to arrange the words on the page so that it looks like a poem.

Now read the poem out loud several times so they hear the pauses and know where the line breaks are. Pause longer between each stanza so they know there’s a larger space between them. Then, ask your students to compare the way they’ve written the poem out with a partner and to make any corrections they think should be made.  Give them a bit of time to do this before reading the poem out loud again.

Now, show your students the poem as written by William Carlos Williams, and have them make the necessary corrections. After they’ve done so, ask them to take turns reading the poem out loud in pairs a couple of times. After they’ve done this ask, “Can you hear all the s sounds in the poem?” and have them underline all the s sounds they hear:  plums, icebox, saving, breakfast, delicious, so sweet, so cold.

Then, if you want, get students walking around the room saying the poem to each other.  Tell them to be dramatic, to speak the poem as if they were speaking to someone  – and of course they are.

Bring everyone back together and either ask students to whom the poem was probably written and where it might have been left or just tell them: Williams wrote the poem as a note to his wife Flossie and left it on the refrigerator (icebox) door. Ask a question like “How do you think Flossie felt when she read this? How would you feel? Your students will come up with adjectives like annoyed, upset, angry, disappointed, dismayed, let down, and devastated. At least mine did.

And my students – no matter how often I’ve done this and no matter what group I’ve done this with – have never had any trouble taking the structure, sound, rhythm, and cadence of the poem, and using this to write their own versions.

My favorite student-written versions of this poem over the years have been:

Notice the creativity in those versions. Notice the way grammar has been shaped and used. Notice the sound and the rhythm. Note that this is language work.  Imagine the fun students have reading their poems out loud to each other.

Short poems can be memorized, versioned, acted out, turned into video stories like this beautiful film by Lam Thuy Vo or a stop-motion video like this one from Betsie Pie Baker.  There’s so much that can be done.

In addition to being sound, rhythm, cadence, and meaning, a poem is also a manageable chunk of language which students have little trouble managing to work with in some pretty incredible ways. Why don’t you give it a try with you students?

If you’d like to find some good poems to use, have a look at the Poetry 180 Project, the Favorite Poem Project or Popular Poems To Teach. If you’re working with young learners try  Funny Poems and Stories or The Twenty Best Poems For Kids.

Now back to the Paul Blackburn poem Invitation Standing. Could you memorize it? Could your students? Could they talk about why it was written and to whom? Could   they come up with their own versions of it? Sure they could.  So could you.

I’ll be talking more about using poetry in the classroom in my presentation for the iTDi Summer School MOOC.  I hope to see you there.

Join Chuck and more than 30 other iTDi presenters for the iTDi Summer School MOOC  live from July 20th to August 17th 2014.

29 thoughts on “Movement, Rhyme and Rhythm in ELT – Chuck”