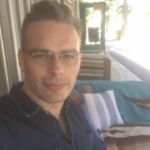 Punk, DIY, and the Art of ELT Conferencing
by Timothy Hampson.

When people think of punk, they think of mohawks, boots and safety pin piercings, but they often forget punk’s DIY ethos. Punks were making their own clothes, making their own album art, and self-publishing records. This gave them a huge amount of control over their own output and independence from a society they felt was overly consumerist. While I don’t know any English language teachers with safety pins through their ears, there is definitely is a very strong punk DIY ethic in the ELT community. In this article I’ll draw from my experiences of founding and organising an ELT conference to give three lessons for anyone interested in DIY ELT.

My own experience being part of the excitELT conference team was definitely DIY. The conference started from a frustration with “traditional” conferences which were often overpriced, overly academic, and overly cliquey. We wanted to change the way conferences happen and, like the punks, we weren’t afraid of a bit of DIY to make that happen. With a small team (varied in size between two and four), we’ve all had to learn new skills to make things happen. Over the last two years I’ve taught myself web and logo design, typesetting, advertising, scheduling, management, and many other skills.

The first thing I’ve learned from excitELT is that you can make small changes that have a big effect and that it’s okay to think small. For example, if your dream is to start your own academy, that doesn’t mean you have to quit your job, get a mortgage on a nice piece of property and hire a full teaching, HR and advertising staff. Instead, it might be a better idea to start taking on private classes, building word of mouth and slowly reducing the amount you work for your primary job. Similarly, if you want to change a curriculum, you can, but improving the worst 2-3 classes of a curriculum is a good way of making some positive change without committing to a complete rewrite.

The original plans for the conference were small; although we had 80 attendees for the first conference, we had originally never imagined having more than 30. The changes we made to the “traditional” conference format were also not huge but ended up being very effective. Switching out hour-long lectures for short plenary speeches and hands-on workshops didn’t take any more effort for the organisers but it changed the whole tone of the conference. Forcing speakers to trim their speeches to ten minutes forced all of the plenaries to be “all killer no thriller.” When selecting workshops, we deliberately picked the ones that were hands-on. As a result, the main feedback from the conference was that the whole day was engaging!

We really wanted the conference to be a more audience-focused and social experience. Simple things like ditching conference booklets in favour of large schedule posters created congregation points for people to ask, “What are you going to see next?” and build new friendships. For the second conference, we introduced the “hangout” as a session type based around conversation on an issue, drawing the focus away from the presenter and allowing teachers to meet one another. Making sure that someone from the organising committee was on the registration desk at all times meant everyone at the conference met at least one of us during the day. The day before the conference there was a social gathering in the park to hang out for the afternoon, and I met lots of teachers that day that I’m still in touch with now.

The second lesson is that you should ask for help. If you do want to change something about ELT, it’s likely that other people feel the same way as you do. In my experience, people in ELT are extremely willing to help one another and are very responsive to twitter messages and emails. You might be surprised by how much traction your ideas get. People might be willing to give advice, or they might be willing to help out in a bigger way.

The more I spoke to people, the more people wanted to help out. Wonderful people volunteered to help with the organization and offered their expert advice on everything from general goals to graphic design. Incredibly prestigious speakers like Scott Thornbury and Barbara Hoskins Sakamoto volunteered their time and gave inspiring presentations. The amount of time and effort that people were willing to contribute astounds me and I think shows how giving the ELT community is.

The last lesson I’ve learned is that you don’t need to be an expert to get things started. Often the willingness to make a change is more important than ability. One of the beautiful things about DIY is that you learn as you go along. You might find yourself learning all kinds of skills you never knew you were interested in and these skills might find their way back into your classroom practice. For example, after using blogs for conference advertising I’ve used blogging as a task in class.

One of my mentors jokes that I’m a person who “went to an ELT conference and decided he could do that too” (which is deeply unfair: I’d been to two ELT conferences). No one on the excitELT team had a background in organising conferences, but all cared deeply about the conference and were willing to learn the skills that they needed to make the conference happen. If we can do it ourselves, you can definitely do it yourself, too. If you do, remember that your that your first steps might be small; that if you’re identifying a real problem, people will be willing to help out; and that you don’t need to be an expert to make things happen.

Timothy Hampson is an English language teacher, publisher and writer based in Beijing. He’s a founder of excitELT, a conference for English Language teachers with that aims to challenge assumptions about how conferences should be run and a focus on being more practical and social. The conference has taken place in Seoul and Tokyo. View all posts by Timothy Hampson