It was eight o’clock on a Monday morning and everyone in the city was busy heading to their offices. As I walked out of my house, I saw three guys in formal suits walking towards the train station and talking to each other. A man in a yellow shirt and black pants was talking to his companion passionately, waving a roll of newspaper in his right hand as he spoke. On the opposite side of the street I saw two school girls wearing white hijab uniform walking together, the taller one whispering something to the other, who then responded with giggles. Next to the train station there was a lady in her nightdress and a pink veil carrying a bag of vegetables from the traditional marketplace located nearby. Some motorcycles were passing by.

These are the scenes that happen pretty much every morning. I am lucky to not be as busy as most of the working people whose day always starts from early morning; or as the school girls who should be at school at 6:30 a.m.; or as any of those other people that I saw. My own mornings are usually more laid-back, except for some rare days when I have to work early and commute to other schools. Like that Monday morning, when my office sent me to a kindergarten to give a demo class as part of promotional and marketing program. I was excited as this opportunity would give me a nostalgic kind of feeling because I was to teach young learners, like used to. The school I was heading to is not far from my place, so I only needed to go by public motorcycle to save time. Wearing the school’s pink polo shirt and pink skirt, I was ready to feel the joy of teaching young learners once again.

It was now 10:40 a.m. and I had just finished the demo class. It was exhausting but I really enjoyed teaching the kids; we sang, played, jumped around and were silly together. I wanted to stay and play with them a bit longer but it was time for me to head to the school where I teach on a regular basis. I ordered the transportation service from my mobile phone and they arrived in no time. Going places in Jakarta has become hassle-free ever since those kind of companies took over the country. The journey to my school did not take a long time either, it was only 40 minutes without any traffic jam.

That day I had three classes: primary school students aka the HighFlyers at 3:00 p.m.; teenagers aged 15-18 years old aka Frontrunners at 4:30 p.m.; and the TOEFL class for adults from 6:40 till 8:40 p.m. Since it was still eleven o’clock when I arrived at work, I had time to have lunch and prepare for classes. The preparation doesn’t actually take long as the syllabi and all the materials are already provided online, which makes it easy for all teachers to access them. Besides, the first class of the day was scheduled to have a progress test and computer lesson in the iLab (computer room), so I only needed to print their test papers for that. However, I knew the test wouldn’t last for the whole lesson, that’s why I planned something special for the remainder of our class time. As there had just been a government election in Indonesia,  we run a short simulation of a real election in class. It was really fun and students loved pretending to be the candidates and vote whilst using the language creatively. When the class finished, although there was not much time left, I had to take attendance online and make notes on what was covered in class on the school’s website before I went back to the teachers’ room.

After a short ten-minute break came the Frontrunners class. It was a group of five girls and the lesson seemed more relaxing as they were not as active as the HighFlyers. I loved giving these students some discussion topics so they could enjoy practising speaking English instead of doing a lot of written work. In fact, this is one of the important moments that my colleagues and myself need to understand: working in a private language school, we shouldn’t force students to do as much homework as they get at their regular schools that they attend in the morning.

My last class of the day, the TOEFL class, was the one that needed more preparation and focus as this is a group of adults determined to achieve their clear goals of getting a certain score in the test, unlike other adult classes I teach that focus on General English, Business English, or English Conversation and which are more relaxing. My colleagues told me to be strict and formal in this TOEFL class, but I chose to do it my own way. I gave them additional activities that were a bit more fun, so the students wouldn’t be bored. As this class consisted of a group of brilliant students, who loved discussing and sharing their opinions with outstanding vocabulary and general knowledge, I had to prepare more challenging activities to engage them. That day, we did the Would You Rather quiz with out-of-this-world questions (such as “Would you rather be stupid in a world of smart people or smart in a world of stupid people?”). I was surprised that they enjoyed doing it, and I made a note that I should think of more challenging (and fun) activities for our next class. Till the end of the lesson we practised for the speaking and writing test on the topic of storytelling and students had a creative task of  comparing someone to a cockroach.

It was 8:40 p.m. when the class was over and I didn’t realize the time had flown so fast. That is why I love teaching. I might be exhausted by the end of the day but it all pays off with satisfaction I get from teaching. As I headed back to the teachers’ room, I watched the students carry their bags and walk out of the centre. Lights in some classrooms had already been switched off, which meant I needed to rush. I ordered another public motorcycle online and prepared to go home. The mall where my school is located was still crowded, with people window-shopping and walking around. Outside, the public motorcycle was already waiting for me among many other motorcycles waiting for other passengers.

What a day, but it was just one of the many similar days in my routine. I’ve been doing this for five years and, I must say, I truly enjoy and feel blessed teaching here. 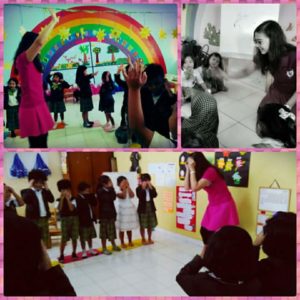 Pravita has been an EFL teacher for more than 10 years, teaching various levels and ages. She loves teaching, making lots of friends, sharing and developing herself through networking, She loves traveling, and most of all Pravita loves learning. View all posts by Pravita Indriati