In the heat of July and August, a determined-looking middle-aged woman burdened with an oversized backpack pulled a small rolling suitcase through the crowds in Shinjuku. She hefted the suitcase up and down multiple concrete staircases in Tamachi and Mita and clung to it protectively on narrow escalators packed with businessmen. The woman was me. I was navigating the city of Tokyo, where I stayed during the week in order to attend classes and study for my master’s degree in TESOL.

I began the program last May and finished up this past August, which is like ordering a large juicy hamburger with everything on it – onions, tomatoes, cheese, avocado, bacon – and wolfing it down in three minutes flat. The director of the program and the kind ladies at the graduate office didn’t use that analogy, but they were dubious about my living far from Tokyo and packing so much study into a short period of time. Their doubt did not deter me, as I was dead-set on making a change in my life and one year was the longest vacation I felt I could take from my full-time job. My husband agreed to foot the bill  (“Think of me as your third child!” I told him, flashing what I hoped was a winsome smile) and also to let me stay in Tokyo three nights during the week so I would not waste study time commuting back and forth to the city. According to some friends, none of this was either sensible or practical.

Potential impracticality has never stopped me from trying something I was determined to do, but on the other hand, going against general disapproval does raise the bar: no-one wants to fail publicly when others have advised them to do things differently from the start. And so I knew that once I began my course of study, pride would not allow me to bail out of the program before finishing. What I did not anticipate, however, was that pride would also work against me at times. And that humility is not easy to cultivate when you’ve been the boss of your own language school for 16 years.

So, what was it like being a student again after a 29-year academic hiatus, and why did my pride fail me? Well from the beginning, I had to come to grips with the fact that writing academic papers is all about precision, not eloquence, and that was painful. As a former English literature major, I had spent years cultivating a certain writing style which just wasn’t working for me anymore.  I was adrift in a different genre. For one thing, my writing was not formal enough. And I kept trying to be funny, which wasn’t appreciated, either.  I found it difficult to describe or even think of theories as “robust” (robust was a milkmaid, right?), to think of language as “input” (which can be impoverished, rich, or even deviant), or to imagine that my students might suddenly have “language-related episodes” (Would they keel over? Would they speak in tongues?). And I was always over the word count.

But somewhere along the line, I got the hang of academic writing: it is precise, and precision is a different kind of eloquence. I learned to write swiftly and accurately, collecting my thoughts as I wrote, whipping off multiple neatly-crafted essays in a three-hour test period. That was a new kind of energy for me, resulting in a new kind of exhaustion at the end. I knew that I had chosen wisely to stay in Tokyo during the week, rather than pushing myself to make the long commute back home in the evenings. As I gained confidence and academic know-how, I began to fully engage in my classes, to feel competitive, and to raise my eyebrows at less serious students who ventured comments like, “Don’t you think we have too many readings?”

I loved every paper I turned in. Well, nearly all of them. And I loved the crazy three hour essay tests that demanded on-the-spot creativity, combined with organizational and analytical skills. Above all, I loved the content: I was writing about language acquisition and about pedagogy, both of which I feel passionate about. So it was crushing when many of those papers and tests came back with very little feedback. Or, in the case of my comprehensive exam – the equivalent of a thesis – no feedback at all. The test was not even returned. I did receive a typed letter from the director of the graduate program congratulating me on passing, but that is not feedback. “The exam was like giving birth!” I protested to my professor. “I want the baby back, and I want someone to tell me how beautiful she is!”

Yet even as I threw dignity to the wind in demanding the return of my exam, I knew that it was not going to happen. Mid-protest, I had already begun swallowing my disappointment and trying to recall the (brilliant?) ideas I’d had while writing so they wouldn’t be lost forever. And I did let go, reasoning, “I’m here as a teacher. Lesson learned: I won’t do this to my own students. All who work hard deserve feedback.” Thinking of the little ones waiting for the re-opening of my language school, I was able to squash the last vestiges of my pride and move on. Alright, I know objectively that there is at least a fraction of a small vestige left, but I’m okay with that.

The final word:  if you’re considering graduate school, go with the awareness that no program and no institution is going to be perfect. You will, however, grow and mature wherever you study. It entails risk, sacrifice, and the cultivation of humility, but you’ll emerge from the experience both wiser (you can’t help but learn something) and humbler (because learning is never straightforward).  I’d do it again in a heartbeat. 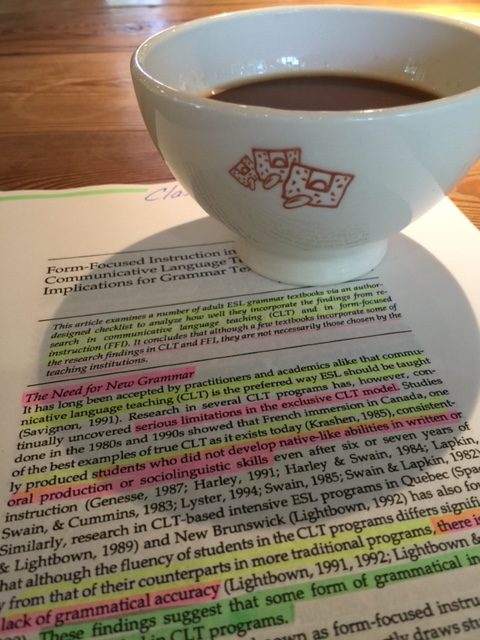 Ruthie Iida, originally from the US, owns and runs a private English language school in Japan. She loves both the experience of learning and the process of studying, and does her best to spark the same passion in her students. Teaching children also enables her to play with Mr. Potato Head, sing at work, and get paid for coloring with magic markers. In her free time she exchanges stories with her daughter, a newbie language teacher in Mexico. Ruthie is glad she charged ahead and got her Master’s in TESOL and happy to be published in the iTDi blog. View all posts by Ruthie Iida