Recording and transcribing classroom interactions for analysis and reflection has long been recommended as a powerful tool for teachers to improve their teaching. Keeping a written reflective journal has also been frequently cited as an effective way for teachers to scaffold continuing reflection on what happens in the classroom. What follows is a brief account of a time I used both of these techniques together, with a twist.

It was 2012 and I was working on an MA TESOL after teaching abroad for the first 7 years of my career. Perhaps my most frequent experience in MA classes (and sometimes an overwhelming one) was the triggering of memories of multiple critical incidents in the face of research and new insights from my professors, and me thinking to myself, “Wow, I feel like I know exactly how that goes, I’ve just never seen it explained!” and, “Oh my, if I’d known this then, I wouldn’t/wouldn’t have…!”

One of my written projects was primarily a response to this experience, an attempt to acknowledge what could be described as “a sense of loss” when looking back at my previous ignorance and ineptitude, but at the same time an attempt to extricate and productively account for what I knew I could learn from. After all, I had close to 10,000 hours of (what felt like) wonderful “raw experience” in the classroom. Surely it warranted some close attention, even if some of it sometimes felt forgettable…even regrettable!

I called the project “Muddles into Maxims: Personal Principles for Teaching Wrought from Novice Teaching Experiences.” Transcriptions of classroom discourse and written reflective journal entries were the two main elements of it, but with one particular (and perhaps peculiar) wrinkle: neither the transcriptions nor the journal entries were “authentic”; none of it was fully real.

You heard me right: I made it all up! Well, not exactly. Let me explain…

The classroom transcriptions were crystallized aggregations of typical critical incidents which occurred during those first few years of my teaching career and concentrated into imagined classroom events. It would remind a dream-record of what I thought I would have likely transcribed from recordings during that period had I been doing such a thing then. I created about twenty of them, one or more representing each of the following nine areas of concern:

I called these semi-fictional snippets from my early classrooms “A Fly on the Classroom Wall”, though a few times I had the spy-fly landing on the staffroom wall as well. Here are two of them, from areas #5 and #9 respectively: 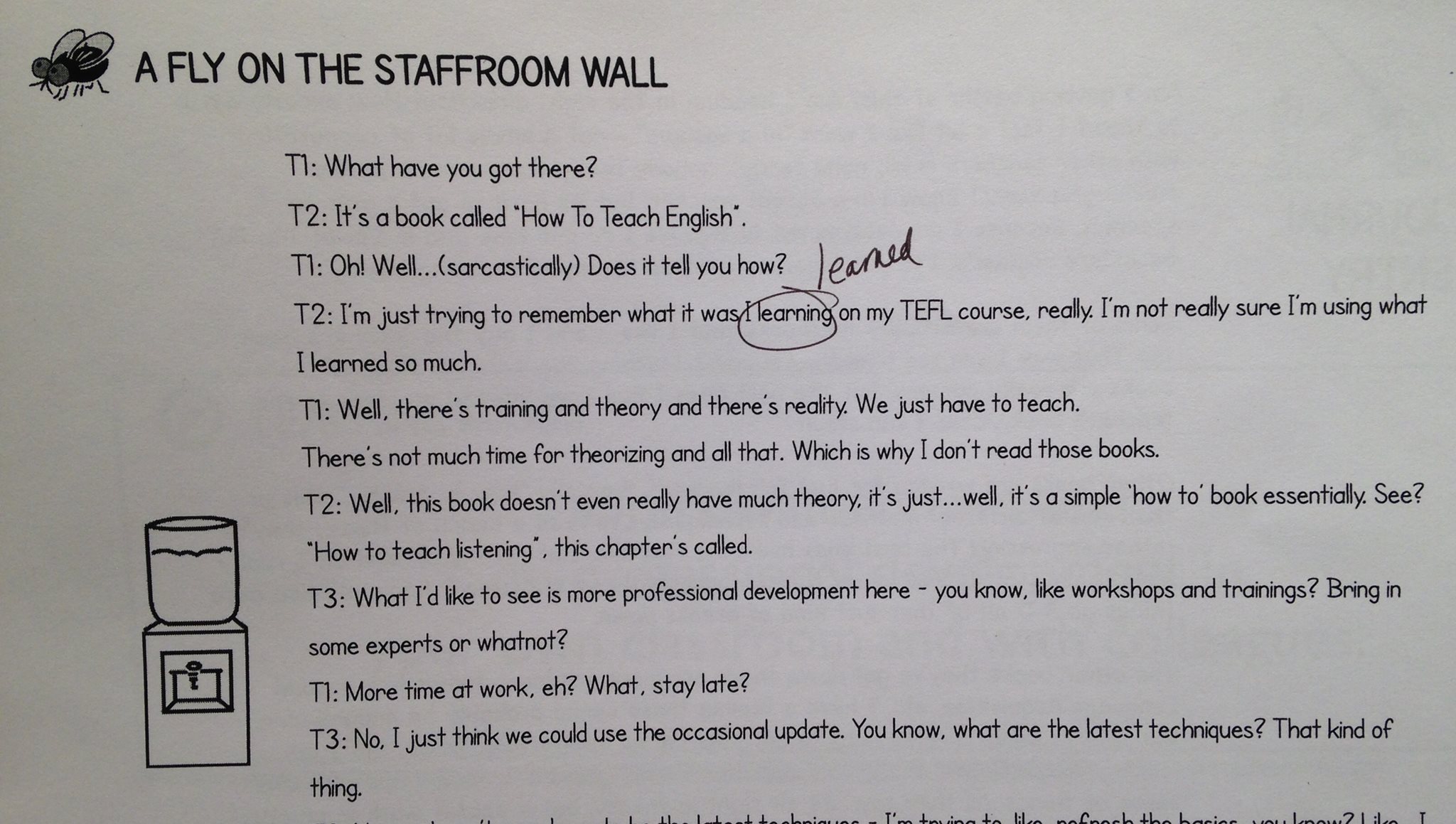 The journal entries, too, were “informed but imagined”, composites written years later as the words I think I would have written after classes had I been keeping a well-organized reflective journal. They represented what 2012 Matthew envisioned 2006 Matthew writing in his reflective journal and in this sense were a kind of reflection on reflection. Here is an excerpt from one that followed the first transcript above: 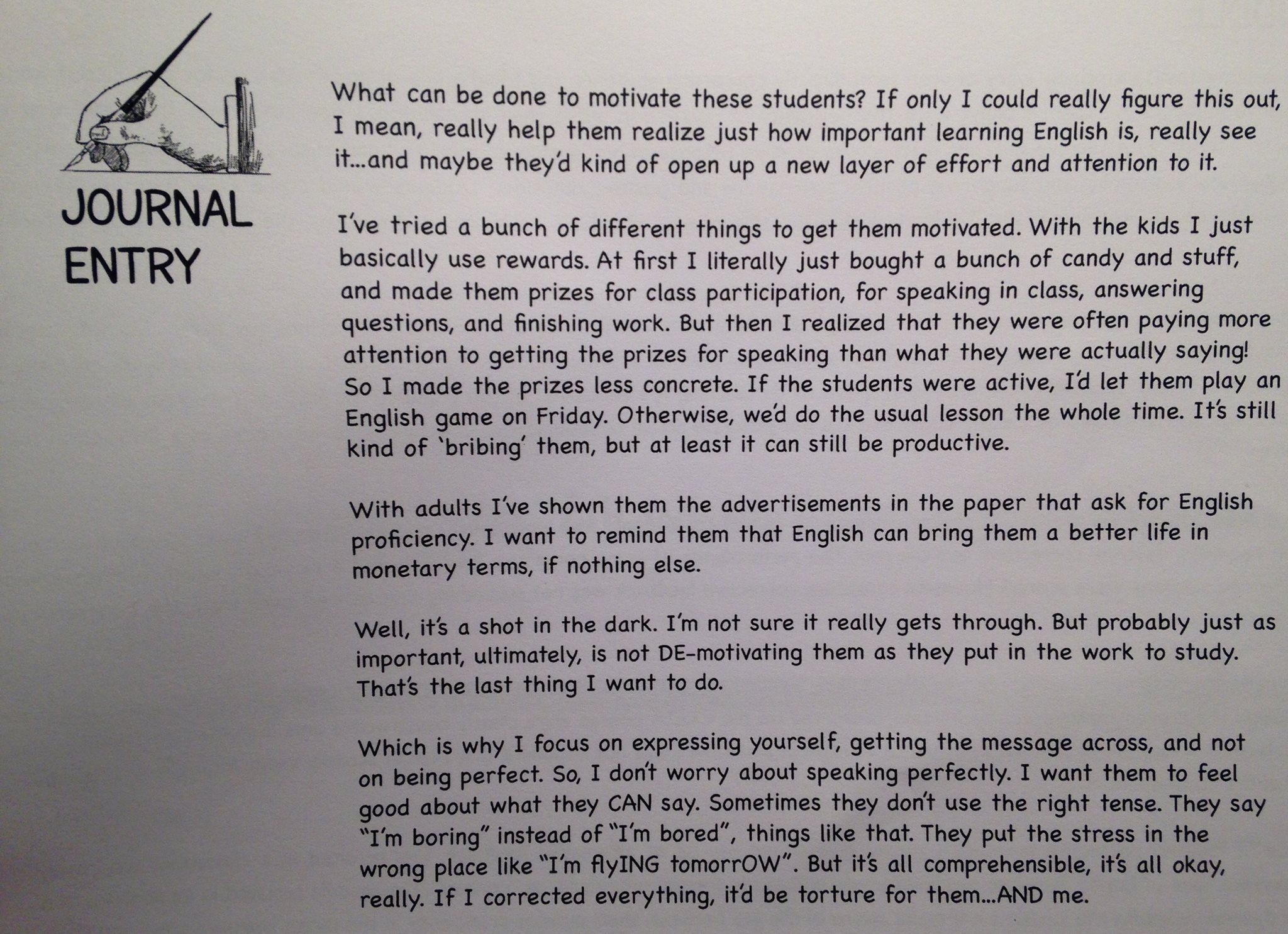 Following each journal entry, there were sections called “My Muddle”. In these sections, I looked at both the initial experiences (represented by the transcripts) and as my perceptions of them (represented by the journal entries) and took stock of the confusion and the effortful enterprise which marked my approach to learning teaching mostly “on the job”. Here’s an excerpt from the “Affect and corrective feedback” section:

As a novice teacher I was extremely wary of even semi-directly correcting students, and I had a pile of seemingly good reasons for this at the time. I didn’t want the ‘negativity’ of correction to affect the students’ motivation. If the teacher focused on expressing meaning and emphasized positive emotions, I thought, students would come away with a satisfying and motivational experience. Clearly they would be ‘weighed down’ by the imposition of corrective judgements! Little did I know that a) corrective feedback need not be delivered in a way that involves any ‘negativity’ and b) students are most motivated by appreciating the results of learning itself, not by simply the superficial atmosphere of the classroom.

Finally, what I saw as the product of the process was a straightforward maxim, or dictum, which expressed the essential principle I wanted to take forward with me. Here are a handful:

This project of reflection helped me both intellectually and affectively. As for the former, I was able to clarify and consolidate more of what had been tacit teaching beliefs, turning them into more explicit, practical thinking tools. As for the latter, I was able to better and more positively appreciate the value of my early experiences as a learning teacher. As I created the transcriptions, I could recognize and value how I employed the understandings I had at the time and the sincere effort I made using what I knew. In writing the journal entries, I gave voice to confusions I remembered but also to the spirit of striving, to the sincere concern for understanding I brought with me from my very first class ever onwards. and found myself truly appreciating my own path of growth.

This project also helped me to take ownership of the tools of transcribing and journaling in a purposeful and creative way. I believe experimentation and creativity are vital elements of teacher development, so I would encourage anyone to look at the tools of reflection as flexible, malleable instruments which can be ‘played’ in many different ways. Didn’t record your class? Reconstruct it, consider it a ‘reflective dictogloss’! Haven’t been keeping a journal? Give it a go…and consider a little time traveling! Reflection itself can be a bit of a “muddle”, so let me offer a final maxim: Whatever twist you put on it, make reflecting fun!