Several years ago, in my pre-iTDi times, I planned my classes alone surrounded by books and worksheets that were printed out from some generic database designed to help a busy teacher. For vacation I travelled abroad and completely forgot about teaching with no trace of remorse. Then I became part of this fascinating international community of teachers and things changed: I could now read posts about lessons held in Turkey, Switzerland or Croatia, talk to these teachers, file their ideas away in my mind, or even try them in my own class. My travelling horizons widened, too, as I caught the conference bug and ventured out on short “business trips”, which was a refreshing concept and a valuable learning experience for me as a teacher. Last year offered me what could be the culmination in this progression of change. Last year I discovered a new, absolutely staggering and transforming way of learning from my community.

Two months spent in South Korea and Japan in the fall of 2014 saw me sitting in, participating and even teaching classes of various sorts, all thanks to the kind, brave and welcoming teachers ready to open the doors. In every class I visited I took notes, which described the activities I observed and wanted to borrow for my class, as well as subtle nuances of individual teaching styles that I would never have learnt otherwise. Here are just a few.

Josette is a trainer for a teacher training program, for which Korean school teachers take about 6 months off their jobs and plunge into serious and responsible professional training. Well, as I found out, there are far better adjectives to describe their learning than “serious”. As I entered their classroom, I was charmed. The fact is that the space, even if empty at that point as yet, had a distinctly tangible personal feel – hand-made posters, trainees’ writing and exhibition of their work, important learning outcomes mapped out on colourful paper “hugging” the room and people in it. One specific poster I remember vividly was for the vocabulary to talk about senses that came from a book they’d read, apparently to be used to teach descriptive writing. I spent quite some time at that poster and learnt new words!

All in all, I wondered if a mere fact of decorating classroom walls with meaningful, personalized messages, which are part of  those teachers’ learning course, would impact the way the group and their teacher communicate. I think it does.

That was an unforgettable day that I spent at the language school where Anne works. I sat in all six classes she taught that day and never felt bored or willing to leave and take a walk outside. In one of the classes Anne set up a tic tac toe game to revise Present Continuous. There was a boys’ team playing against a girls’ team, and the energetic teen girls very quickly got very loud and excited. To my surprise, not a single emotional comment during the fiery discussion went off the teacher’s lips. Every word Anne said was to the point of the game – no “bringing them to senses”, digressing, patronizing or telling off. That was the most impressive way I’d ever seen anybody deal with a group of boisterous, and what to me would seem unruly, teens. I walked out of that class stunned and amazed at the personality of that Teacher.

Tech and bingo with Mari Yamauchi

Mari Yamauchi, a teacher I know specifically from the Students Connected Facebook group that we started together, invited me to join her class in Chiba University of Commerce. For that lesson she had prepared this Padlet wall with nontrivial Russian and Japanese culture facts so that we could play Bingo for our mini cultural exchange. It was an utter surprise for me and a lot of fun for everybody, in the end. We first made our guesses whether those statements about our countries were true or not, and then as the game proceeded, we discussed each statement in more detail. Not only did I learn that “matryoshka” aka the Russian nesting doll originates from Japan, but also saw in practice how Padlet could be used creatively and successfully in class. 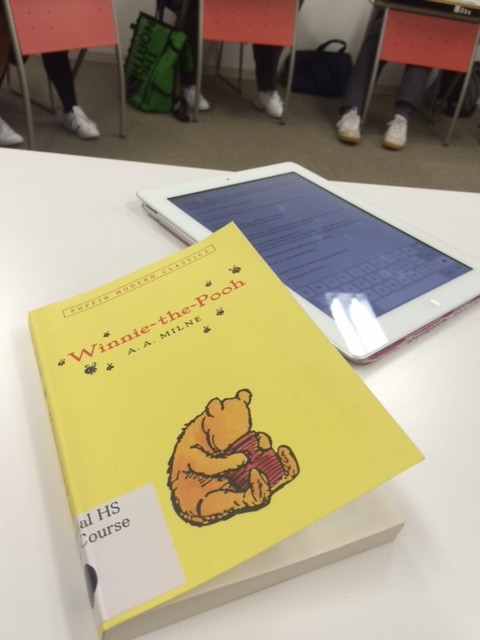 Interestingly, nearly every teacher who invited me to visit their lesson excused themselves for the class being “not exciting”, to which my response was every time the same: “This might be a regular, “just another” class for you, but for me it is a whole new world”. One might argue that a lesson on extensive reading could indeed be boring… however, that did not happen for me. Kevin Stein invited me to join the first Extensive Reading class in my life. It was silent and beautiful.

Students picked books from a selection of graded readers and sat down to their desks arranged in a circle. I picked my all time favourite, too. For about 25 minutes we read in silence. As the timer went off, all students were instantly alert and ready to do the next activity, asking for no instructions as they knew the rules very well. You can find a thorough explanation of the Read Think Write activity in this blog post, but in short what I saw was this:

The students opened the front page of the book they’d just been reading and read as much text as they could remember. They then closed the book and wrote the text from memory in their notebooks, never consulting the original. Once finished, they put a slash and returned to where they’d stopped reading and repeated the process. This lasted for 7 minutes. And it won’t be an exaggeration to say that I actually wanted badly to join them and read, think, write myself!

On the same day, after being impressed with the power of silent reading, I joined a speaking class of a teacher I’d just met in that school, David Sandbrook. David’s students were about 8 Japanese high school kids and me. The time flew by and only by the end of my second hour there it dawned on me what made this learning time different for me. In a chain of activities planned by the teacher, every other one presupposed a certain alteration – either a different partner for group work, or a move to another zone in the classroom. There might have been four or five such changes and they helped keep the focus and attention on every new task. It is undoubtedly one of my big objectives for this new teaching year to make use of classroom space with more ease and confidence!

Travelling from class to class was an unforgettable Adventure of its own kind. My whole understanding of travelling has been turned upside down thanks to the teachers who not only care to share links, comments and their online time, but are similarly willing to expose the sacred space behind the closed doors of their classrooms. From that Adventure on, I can’t get past the gripping idea of knocking on another classroom doors in my future trips =) To me, this story from my own life is a perfect example and a proof of how a door open online can mean the openings of so many other doors.

Anna Loseva is a Russian teacher of English in a university in Tokyo. She curates the iTDi Blog, writes (mostly about teaching and learning) on her own blog at http://annloseva.wordpress.com, and co-runs Reflective Practice Group in Tokyo. Other than that, Anna spends time reading, travelling, doing yoga, and learning more about sketchbook art. Anna is passionate about teacher AND student self-development and she strongly believes that fruitful education process is driven by the mix of positive thinking, inner as well as outer motivation and avid curiosity. View all posts by Anna Loseva

2 thoughts on “Connected Teacher as Traveller”