One of the best ways of getting kids collaborate is to have them create or reinvent a communicative game. Working together to design a game involves many skills including active decision-making and language practice in every skill area while giving them a sense of achievement and ownership.  Creating games is also an excellent craft activity that can involve a lot of language use. The children can make their own dice, create cards, and design game boards based on rules they have agreed upon. Game making almost always excites the children. The project culminates on a day when the game is played.

Recently the six 8 and 9 year old in my class reinvented the classic Fruit Basket Game. I was the weather, practicing questions and answers like:

I handed out six white pieces of construction paper and asked each kid to draw a different picture of a type of weather. Deciding who would what became a big deal, so they decided to use rock-scissors-paper to work it out. Once they did that, it took them about 15 minutes to finish their drawings and write captions like:

Then I suggested we use the cards to play a game. Since there were only cards for six kinds of weather (sunny, rainy, cloudy, windy, snowy, and stormy), the kids figured out it would be impossible to play their all-time favorite Card Pairing Game. One of the kids suggested a variation on Fruit Basket Game but was unsure how to make it work. I asked them to discuss it and come to an agreement in five minutes time.

Here’s what they came up with:

1. There will be five chairs to form a big circle, spaced at a distance so that players can run easily.
2. The player who is it should stand at the middle of the circle. Shuffle the picture cards and place them face down on the floor with his/her eyes closed.
3. Players take a card but should not show it to other players.
4. The person who is it should ask a player; “How’s the weather, today?” If the player answers it’s rainy, it’s stormy, it’s windy, it’s cloudy, it’s snowy players should stay where they are and remain sitting. If the answer is It’s sunny everyone shouts Let’s go! then stands, runs, and quickly changes chairs.
5. The player left without a chair and still standing at the end should become the next person to be it. 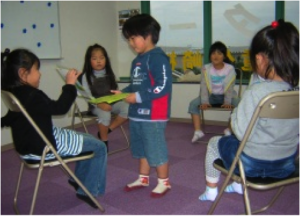 There was heated discussion among the kids about which of the two weather conditions would be the signal to stand and change chairs: sunny or stormy. At first some members argued that it should be stormy weather, but other members of the class pointed out that you cannot play outside during stormy weather, and everyone agreed. 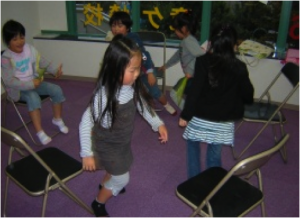 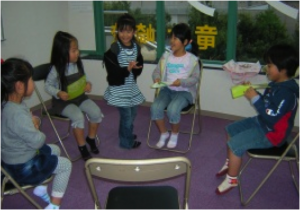 The magic behind this enthusiasm is that it had became their game. Of course we can call it collaboration, but kids don’t need big words like that.  All they need are opportunities to do it. Give your kids a chance to create a game of their own and you’ll be amazed at how far they take it.  ~ Marco

Marco holds a Master's degree in Child Psychology and a degree in Development Communication. He has been teaching children and training teachers in Japan for over 16 years. He believes learning and teaching English should be fun and easy for both non-native learners and non-native teachers. Theater is a passion and directing plays is what turns him on. Marco, his wife, his daughter, and his pet dog, Pippin, live in Tsukuba City, Japan. View all posts by Marco Brazil