When I attend presentations when people use Power Point, nine times out of ten, the speaker reads the print or figures on each projected slide aloud, pointing to some items with a red beam of light to remind those of us in the audience what item is being read aloud. The font in the slides is often too small for those of us in the audience to see if we sit beyond the 6th row. But this does not matter because if there are fewer than 50 of us we are given a printed copy of each slide. So we can read the print even in a small font since we have it before our eyes.

What I do and notice others doing is reading the printed slides in front of us. Since we can read silently at least twice as fast as the person reading aloud, we often close our ears and focus our eyes.

Even some who follow these practices are not able to tell me why they follow these steps except to say, “everyone does.”

If you are fine with these usual steps, stop reading. If you would like to consider some alternatives, here are a few.

In short, use the texts as an impetus to discuss the points you are making rather than just talking at people and then at the end say “Oh, we have a few minutes left if you want to ask any questions.”

I have attached some remarks I made at an opening ceremony at a college I was president of in NZ. The ceremony was held in a theater that seated around 500 people. New students, present students, faculty, parents of students and members of the community were attending.

There was a large screen on the stage where I was standing so that the 10 pictures at the bottom of the page, which I showed one by one as I mentioned them, were easily seen by all 500 in the audience. The projected pictures were like 20 feet square! As I mentioned each picture I pointed to features that I was talking about using the red beam so loved by those who use Power Point. The pictures were in color when I projected them. In the jpg on page 4, as part of this Blog, they are black and white as you can see.

I had not given out a printed copy of my comments so some in the audience missed many of my comments. But since my questions were similar, just to ask participants to wonder, they in fact did wonder.

And when I took off my suit jacket, tie and dress shirt, though I said many words they were not needed as the people could see what I was doing.

Having said this, since many in the audience were not strong speakers of English, they could connect what I said with my actions and the pictures so they could get more than if I had just shown what I was saying in Power Point.

When you get to PDF 3 on page 5 you will see that the copy is not perfectly clear so you will have to figure out the numbers on the clock that are in reverse order and you cannot see the message on my t-shirt since the message is on the back of the t-shirt and the picture of the universe is on the front.

Oh, by the way, the Governor General in NZ is the representative of the queen. But NZ, to generalize, is a very egalitarian society so the GG was not at all taken aback by my taking off my jacket, tie and dress shirt. 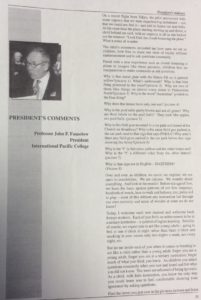 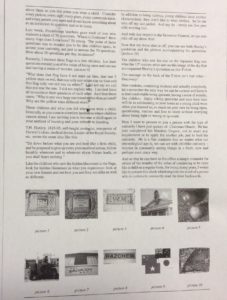