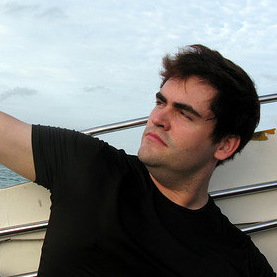 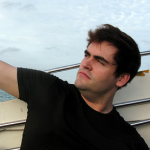 Matt Shannon is an educator, cultivator and curriculum developer who works with elementary and junior high school students in Saitama, Japan. His goal is to provide real-world opportunities for EFL learners, specifically in the areas of debate, journalism, and science.  Some of his students will have an experiment launched into space soon. He enjoys cooking, gardening, and the life sciences. He likes to build things.

What are you passionate about, Matt?

I’m passionate about thinking, sometimes just about thinking itself. Whether it’s a purposed sort of thinking to help you go from a gut feeling or idea to a realized vision, or the unstructured process of seeing where you are, seeing what’s possible, and then seeing what else might be possible from there. That moment that happens a short while after you’ve emptied your mind across enough sheets of paper or blackboards, when all the new thoughts rush in? That’s the best, and we’re fortunate as humans to be able to pick up on that energy from those around us.  As a mind lives in a body, and a body in the world, our thinking affects the world as it affects us. It’s a reciprocal relationship. I believe that a deep appreciation of the possible realities afforded by thinking leads to increased stewardship to the world we live in now. Buckminster Fuller used to ask, “What is the most important thing we can think about at this extraordinary moment?” That’s a beautiful statement.

We’re only a few years into on-demand three dimensional printing, crowd-sourcing venture capital, microfinance, phone apps, integration of social networks, cloud storage, and dramatic reductions in the cost of hardware development, thanks to projects like Arduino and sub-$40 computers; free software has and always will be there. That’s a lot of barriers to product, social, or mental development getting knocked down, with entirely new distribution models for thought being embraced. Take a look at what it takes to get $20,000 in capital investment off of Kickstarter <www.kickstarter.com>, and try to compare that model to anything that previously existed. As a kid, I kept wondering what the next light bulb would be, and it certainly appears as if a slew of them have been developed in the last decade. YouTube is only seven years old, and smart phones and wireless Internet are currently one in their fourth generation.  I wouldn’t be surprised if the confluence of learning curves for all these tools means we’re at something like peak opportunity.

What’s the biggest challenge you face as a teacher?

It’s tempting to over-commit yourself, which is a behavior that’s just par for the course in our field. When I was less mature and counted every chicken before it hatched, I chalked it up to a lack of discipline, and later to a lack of energy. It’s become much easier to see why something is great for my students and surroundings and better for then than it is for me. I have to stop and think about what I can actually incorporate. The second part of that is that while I have gotten a lot better about managing myself, I still may have a cultural barrier with my Administration when it comes to adopting change. Opportunities come and go, yes, but it’s frustrating to know that something occurring three months from now may be too soon to consider. I have more than a few stories about this.

What advice would you give a teacher just starting out a journey of professional development?

I would join the nearest professional group relevant to my field while looking at what it is that I do in a classroom (or out of a classroom) and how I share that, and start talking from there. The process of writing a paper for your field is fantastic; you’re going to get some much-needed personal attention to your ideas and will probably develop at least one relationship right off the bat, and then as the commendations or criticism roll in you’ll be getting that many more people involved in your professional life. Small workshops or lectures are great; in the Japan Association of Language Teachers (JALT) it’s not uncommon to find open calls for 20 minute or less MyShares — which puts that many more like-minded people together. So in short, my advice is to get out there, and get your name out there not for the sake of having a name, but simply to get the most feedback and as many meaningful relationships as you can get.  Social media has made it a lot easier to form groups, represented physically or not, and there are certainly enough modes to digitize your statements, but they don’t represent the full range of physical environments and relations that a single meeting might offer. This is definitely a nod to all the conversations I’ve had well after the meeting has concluded, and to colleagues who have become friends over food and refreshments.

Is there any blog or online link you’d like to recommend?

For sake of this interview www.kickstarter.com is as a good reference point for watching ideas bloom or sputter as any. I myself have a strangely poor habit of getting information from a single aggregator, but I make up for it in direct emails.

What’s your favorite quotation about teaching or education?

It’s hard to stick to one; “I hear and I forget … I do and I remember”/”We learn by teaching” always strike me as the most practical and frequently so, and there’s some funny stuff out there attributed correctly or not to the likes of Einstein and Twain, so I’ll suggest this one from Ellen Bialystok. “Literacy is the ticket of entry into our society.” You can use the larger meaning of literacy if you like, and debate what society is, but it’s a good one and the right message for my field.

Have a device on hand to take notes, be it paper or electronic, or even just start mailing notes to yourself. I buy these little notebooks at the ¥100 shop, this square 18x18cm hardcover unlined book with a flowery elephant on the cover being my favorite, and just fill them up with ideas, notes, receipts of places I enjoyed — stuff like that. They’re my treasures now, just pure alchemy, and while I’ve gotten pretty good about photographing things I like with my phone, there’s no battery or glare issues with these. Just keep emptying your mind out on that paper, watch it fill up again, and repeat as you like. If you’ve never been one to keep a diary before, then you’re in for a surprise the first time you look back at a number of pages with any great time that’s passed between them – how we talk to ourselves is pretty special, and in my experience these note journals form a narrative that I don’t think anyone should be without. 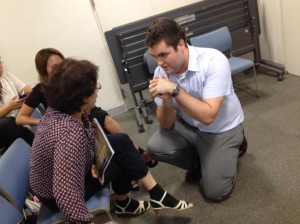 Matt Shannon is an educator, cultivator and curriculum developer who works with elementary and junior high school students in Saitama, Japan. His goal is to provide real-world opportunities for EFL learners, specifically in the areas of debate, journalism, and science. Some of his students will have an experiment launched into space soon. He enjoys cooking, gardening, and the life sciences. He likes to build things. View all posts by Matt Shannon

One thought on “Voices from the iTDi Community 4 – Matt”